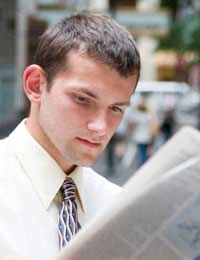 John Strachan is a keen amateur actor and is proud of his clear speaking voice. He puts it to good effect as a volunteer with talking newspapers. Talking newspapers provide a service for blind and visually impaired users by recording the news onto CD.

John got involved through his wife Lisa who edits the newspaper. Once a week he goes along to the recording studio and reads the news into a microphone. “It is all from the local newspaper. Lisa will already have gone through and chosen which articles will be going into the edition.” Lisa will also have edited the items to include descriptions of pictures and photographs and to update any time-sensitive words. “My job is to read the news as clearly as possible and to try to maintain an interesting sounding voice. We don’t want to send people to sleep.” John says.

He is one of three news readers who record the news. “It’s important that listeners get variety in the voices they hear.” In addition to reading the news John also writes cinema and theatre reviews, voicing his opinion on the latest releases. “All of the news readers have specialist areas where they write for the paper. Having said that the pieces aren’t always used. It depends how much time we have available.”

Challenge and Responsibility in Volunteer Job

Lisa has volunteered with her local talking newspaper for ten years and began as a volunteer newsreader like John. Over time she progressed to take on the role of editor which involves pulling all the news together, supervising the readers and ensuring that the technical side of the recording goes to plan. “It’s quite a lot of responsibility” Lisa says “but I enjoy the challenge. We have a good team and everyone knows what they need to do so that helps a lot.” In addition to the three newsreaders and some casual reader volunteers there is also a technician who looks after the technical aspects of the recording studio as well as volunteers who help with distributing the CDs to members and who wipe and reuse the CDs to recycle them after use.

Lisa and John cater to over 200 members in their local area, all of whom benefit from the chance to hear the local news which they would otherwise be denied. “It’s good to know that it is all worthwhile and we do get good feedback from our members”. Building on the success of the newspaper John has also recorded a book of local poetry and a local history of the area. Lisa has plans for more books of local interest to be recorded too. “We provide an important local service and we want to fulfil that role as much as we possibly can.” She says.

Fundraising Has to Be Done Too

None of this would be possible without funding and so John, Lisa and all the members of the team spend time fundraising as well. Charity auctions, fun runs and a barbecue have been some recent initiatives along with talks with local businesses some of whom provide sponsorship for the important local service.