A Career Break to Volunteer Abroad: A Case Study 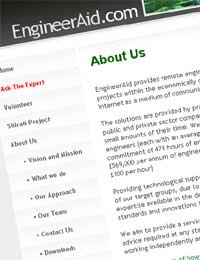 George Bickley enjoyed his high-powered career as an engineer until he broke his leg. “The time off work gave me a period to think about what I was doing with my life.” Although he enjoyed working on transport and sanitation projects and earning a good income from it he realised that he had become stuck in a rut. While he was in hospital the person in the next bed to him told him about a trip they had made to North Africa and the problems they had witnessed in Sudan. It set him thinking.

“While I was recovering at home I surfed the net and found out about Engineer Aid which asks volunteers to donate their time and have input into projects abroad.” From the comfort of his own home George was able to join the project and directly contribute his knowledge and advice. “Basically people across the globe post projects where they need technical know-how and I was able to assist with those which fitted my skills.” George continued his involvement after his return to work and assisted with engineering projects in the Sudan, Congo and Sierra Leone.

He discovered many different problems to his UK projects and these both acted as a challenge and extended his horizons. He found himself taking a more innovative approach in his everyday work “I began to look at things differently.” George soon found himself taking a wider interest in the overseas countries where he was assisting with projects and after a year decided that he would like to get more actively involved. “I wanted to challenge myself on the ground but I also wanted to give more direct help and actually spend time with people there to work together to achieve a goal.”

His employers supported his request for a sabbatical and he found a three-month position as a volunteer on a sanitation project in Sudan. “The country has some of the worst humanitarian problems in the world due to civil wars and a catastrophic flood. I was warned about the conditions but still shocked when I saw them.” George helped to set up clean water filtration systems for several villages. “It seemed such a small thing to do but it made a big difference.” He was amazed by the optimism of the people in quite extreme conditions. There was a camaraderie that surprised him and he realised that the priorities of life were very clear and simple each day “survival, family, friends”.

George felt quite changed by his experience. He has learnt that he can cope under pressure and work with others to achieve goals in the most trying of circumstances. He now places a new value on people and things he used to take for granted. He has also gained an insight into the almost impossible conditions in which some human beings have to live and is determined to continue trying to make a small difference.

George feels that you don’t have to be an engineer or go to such a difficult trouble spot; he would recommend anyone to volunteer in a new place or environment, to broaden their horizons. “The sense of fulfilment is amazing. Even though you may just be a drop in the ocean lots of drops can start to make a big difference.”