Home > Becoming a Volunteer > Your Responsibilities As A Volunteer

Your Responsibilities As A Volunteer 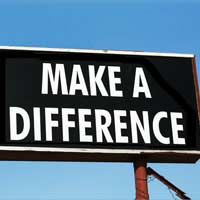 Although you are volunteering your services for free it’s still necessary to honour your responsibilities to the role in accordance with what the organisation expects of you. These responsibilities will vary according to the charity or organisation you are working for and the type of role you’re looking to undertake but you’ll be able to be discuss that at interview and you’ll usually be given some kind of handbook or brochure which will state both your rights and responsibilities in the role you’re going to be carrying out if you are offered a position (Note – Your rights as a volunteer are discussed in another article contained in this website).

In general terms, however, here are some of the basic responsibilities which are pretty common to most voluntary organisations and they will, at least, give you a flavour of what would be expected of you.

You have a duty to respect the organisation’s policies on issues like racial discrimination, sexual harassment, affirmative action and disability discrimination and, if you don’t understand the law on any of these issues, you should make it a point to read up on them. They will not just be policies which the organisation has devised but government legislation which will be common practice in all workplaces so, if you contravene any of these policies, not only are you liable to be dismissed, you run the risk of legal action being taken against you and you could end up being taken to an employment tribunal.

Carrying Out Your Duties

You should carry out your duties in accordance with the written copy of the description of your role which you should be provided with before you start. If you’re unsure about carrying out any aspect of your role, you should seek advice from your supervisor.

Whether its work colleagues or people you are trying to help, it’s important that you show respect to all those with whom you come into contact with whilst performing your duties. Treating people as you would like to be treated yourself is a good basic philosophy to follow. Show consideration and be prepared to compromise occasionally if it’s in everybody’s best interests and seek to resolve any conflicts or disputes quickly before they escalate.

Find out what the dress code is for volunteers before you begin your work and abide by it. This is even more important if you are working in certain locations overseas where customs and culture can be very different to what you’re used to back home and inappropriate dress can often be seen as disrespect towards the people you are working with.

Ensure that you conduct yourself properly, behave in the right manner, don’t use bad language and make sure that any external activities you engage in are acceptable. Once again, if you are volunteering overseas, you’re likely to be living as well as working within a local community so it’s important you find out the local customs and traditions and behave in the appropriate manner.

Take good care of your health and report any sickness to your supervisor immediately. Also, remember that drink and drugs use and their after effects can not only impair your ability to carry out your role but that they can have serious legal implications in certain countries. Also, no matter how passionate you might be about a particular cause, be very wary about lending your support to local protests or demonstrations in countries overseas. Not every country has the same democratic rights of free speech as the UK has and you could end up being imprisoned and even endanger your life if you get caught up in local protests.

Make sure you know your exact shift patterns and the days on which you are expected to be working. Just because you’re a volunteer, this doesn’t mean you can turn up when you want or take time off without giving notice. If you do need to take time off, make sure you discuss it with your supervisor first so they have time to find a replacement to cover your shift, if need be.

Be prepared to be pro-active in your work. Voluntary organisations expect you to offer your opinions and suggest new ways in which projects can be approached and challenges overcome and don’t be afraid to seek advice either.

Show the same courtesy you would with an employer if you choose to leave your position and give written notice that you intend to leave in accordance with any guidelines you’ve been given.

Do You Have What it Takes to Be a Volunteer?

Volunteering: Is Part or Full Time Right for You?

Voluntary Work With Local Museums
Share Your Story, Join the Discussion or Seek Advice..
[Add a Comment]
I volunteered for a Cat Charity local branch and had no training or supervision,I got some guidance on what was involved and what and how I should do things by the previous volunteers or asking other branches advice.A regional manager was aware of somethings that were done in the branch but no input was given into how the branch was run.A dispute has come about from a Cat adopter and the main charity that say they do not have to honour any decisions made by branch members because they do not have the authority to make decisions.But as I previously said no guidance or training was given just carry on as before what ever that was.What responsibility do the main charity or the branch have for honouring such agreements?
Gill - 18-Mar-18 @ 12:41 AM
I have been a volunteer at an Age Uk charity shop for 10 years, some of my fellow volunteers have been working there for up to 15 years. Age Uk have just introduced scratch cards and we sell about 2 a week. Being part of the much older generation, most of us do not agree with gambling, but our local head office is trying to 're-educate us - or brainwash us into pushing them. The shop is in a small town with a population of 3500. During the week, the average age of the customers is probably 75, most of whom come in every day to meet us with friends over a cheap cup of coffee. The manageress and two deputies (paid a salary) are under enormous pressure to increase sales of these cards which has caused low morale in the shop. The layout on the cards is £1 or £2 and send an sae to claim a prize of more than £10,there are 4 other outlets in the town where the contents of the till we paid out on the spot.Poor judgement by Age UK is being blamed on volunteers. Sue Ryder us selling them through Morrisons, where a half days footfall is probably equivalent to the total weeks footfall in our shop.
Celia - 26-Apr-16 @ 6:05 PM
SENT A PREVIOUS MEESAGE HOWEVER NO EMAIL
CABALLO - 16-Jan-13 @ 11:06 PM
i cannot get voluntary work as my crb has 2 attempted robberies in 1992 when i was an alcoholic i havent drank now for 15 years i suffer with depression and i wouldnt hurt anyone can you give me some advice please thanks
coomsy - 18-Sep-12 @ 4:38 PM
Title:
(never shown)
Firstname:
(never shown)
Surname:
(never shown)
Email:
(never shown)
Nickname:
(shown)
Comment:
Validate: